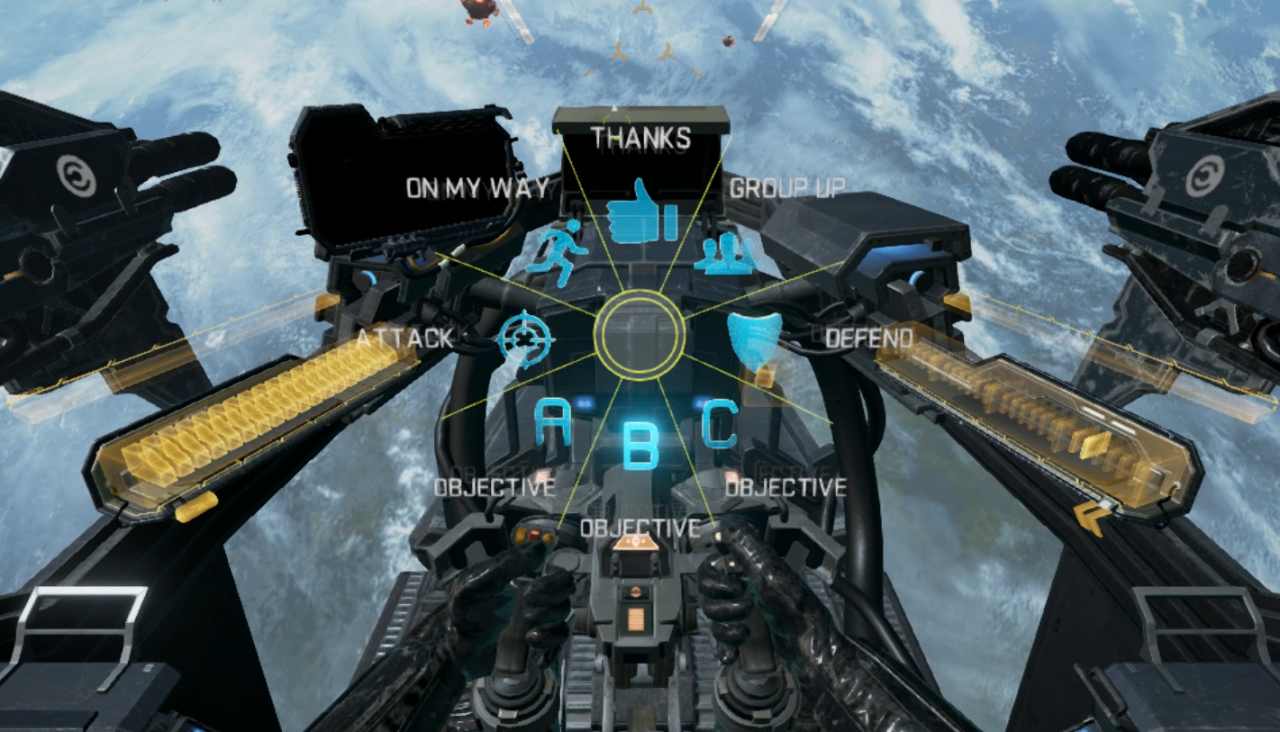 Even as a rookie Valkyrie pilot, you’ll be aware of much of the language used when describing the various features of EVE: Valkyrie. Fighters, heavies, support, Team Deathmatch, Control, Carrier Assault and so on. These are the nuts and bolts aspects of the game that you will become familiar with right from the get-go. You'll also be aware of Valkyrie's super-useful Com Alerts feature, that enables pilots to quickly fire off orders and requests for help at the touch of a button or two.

However, whenever human beings embark on a common pursuit – be it gaming, art, business, sport or social media – the participants soon develop their own vernacular to more easily communicate with one another and EVE: Valkyrie is no exception.

Whether actually playing the game with more experienced pilots, or scouring the internet for live streams and YouTube videos in search of advice from the experts, you’ll no doubt come across terms that you’re unfamiliar with. Worry not, gentle reader. What follows is a brief guide to some of the language used by experienced pilots, allowing you to better understand any advice given and start using the terms yourself to improve communication and teamwork with your fellow flyers.

This is how pilots refer to the aiming mechanics that the pulse lasers on the Storm, Ascent, Spur and Displacer use, in that the pilot’s ship does the bulk of the skillful work of aiming instead of the individual.

The act of switching, focusing and killing a particular target really quickly in an attempt to destroy it before it becomes a major threat (typically support ships entering an area, or a Maelstrom entering a cluster of pilots).

This can refer either to using the capacitor to boost (although simply saying ‘boost' is more common), or it’s used to refer to a capture point. Be sure to listen out for the context to avoid confusion.

Due to the complexity of embarking on a Carrier Assault, teams often coordinate with distinct locations on the carrier. Essentially these are bridge, rear section, mid-section, upper and lower. This way, if there are five in a squad, each pilot can have a section to themselves to maximize damage output.

ECM (electronic countermeasures) and EMS (electromagnetic shields) can both be used to prevent missiles from hitting you, so they are often referred to collectively as chaff or flares.

This is when two fighter pilots that are equally skilled come up against one another, often leading to one ship trying to outmaneuver the other in an attempt to get a firing solution on it. It typically results in two ships almost pirouetting.

The map room that everyone loads into before the start of the game, where you see the other players.

Usually used in the sense of "I'm heading to A and will cycle to B". This is essentially stating your intention of flying to a point on the map, killing defenders, taking a point, then heading over to another point on the map to try and claim it.

This is the current term for the amalgamation that occurs in Team Deathmatches when you have an intense cluster of pilots all trying to shoot each other in a tight ball.

These are the turrets on ships that forward-fire only, requiring you to turn the ship to aim.

Not particularly functional, but these are the go-to phrases used when getting overwhelmed by the intense enemy carrier’s flak cannons.

An alternative term for flying support ships. In EVE Online, the ships that repair are known as logistics ships, or ‘logi’ for short.

The act of reacting to an Ascent or Storm shooting you. Here you look at where the target is and turn in a closing orbit to it with full-on boost to prevent it from tracking you effectively.

When a bunch of a teammates suddenly arrive at a point at the same time in an attempt to take it unexpectedly.

Healing a target in quick bursts of under five seconds to prevent the cooldown from kicking in.

This pretty much exclusively describes the two flak turrets that are just outside the core inside a carrier. They are often destroyed to enable maximum damage passes on the core.

A simple notion of two fighters just facing each other and firing, playing chicken to see who pulls away first. It can sometimes result in both ships killing each other at the same time.

Simply the microwarp drive that exists on the heavies and the Spur.

In Carrier Assault Mode, when attacking the enemy carrier, the cooling nodes are simplified to just ‘nodes’.

The act of ramming a heavy ship that has activated the initial warp spool-up in order to prevent their escape.

Just refers to the capture points A, B and C.

The act of, quite literally, flying into an opponent as a last ditch maneuver, sometimes at low speed to move them, or at high speed to attempt death (the latter is referred to more as ‘suicide ganking’ as it normally kills both ships).

The invisible line that exists in space near the enemy carrier and map perimeter that, if entered too deeply, will result in your destruction.

The repair beam from a support. If someone calls for ‘reps’, they want to be repaired.

The EMP effect from the mines and EMS weapon freezing your ship in space.

Trying to heal multiple people at once, but having to decide which of the most vulnerable targets takes precedence for healing.

The act of a fighter pushing along a slow moving heavy, to get them somewhere faster or just to disorientate them.

Wormholes become just ‘WH’ or ‘W-Space’, as opposed to ‘Known Space’ or ‘K-Space’ where the non-wormhole maps are.

Armed with that information you can start using these terms out there on the battlefield to both up your game and come across as a total pro.

Big props to General Stargazer for his insights into the language of the Valkyrie.